The Republic of Zambia adopts Brothers For Life Campaign

KABWE, Zambia, 18 October 2011 – The National HIV/AIDS/STI/TB Council has distributed more than 30,000 Brothers for Life posters and brochures to its provincial and district officials nationwide.

“It is critically important that Brothers for Life reaches the community level, the grassroots,” said Bishop Joshua Banda, Chairman of Zambia’s National HIV/AIDS/STI/TB Council. “I am pleased that using NAC’s officials in all nine provinces and 67 districts that the new Brothers for Life IEC [information, education, and communication] materials will visible and begin to influence behaviours regarding HIV and AIDS, gender-based violence, and alcohol abuse. 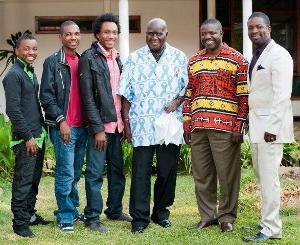 “The success or failure of our HIV prevention efforts is determined largely by the extent of the involvement of men and boys,” said Bishop Banda.

“The Brothers for Life campaign fits well into our national approaches which focus on high impact strategies against the AIDS epidemic.”

At the end of October, Brothers for Life began taking its message to the masses through television and radio advertisements, and later through community-based discussions and face-to-face communication.

NAC and UNICEF are working with a broad partnership to bring Brothers for Life to Zambia. The partnership includes the Ministry of Health, UNFPA, UNAIDS, USAID, PEPFAR, Champ, Communications Support for Health, and the Zambia-led Prevention Initiative, among others. Funding support for Brothers for Life Zambia comes from a generous contribution from UNICEF Denmark.

UNICEF is on the ground in over 150 countries and territories to help children survive and thrive, from early childhood through adolescence. The world’s largest provider of vaccines for developing countries, UNICEF supports child health and nutrition, good water and sanitation, quality basic education for all boys and girls, and the protection of children from violence, exploitation, and AIDS. UNICEF is funded entirely by the voluntary contributions of individuals, businesses, foundations and governments. For more information about UNICEF and its work visit www.unicef.org and www.unicef.org/zambia.