Putting the spotlight on the gendered impact of silicosis 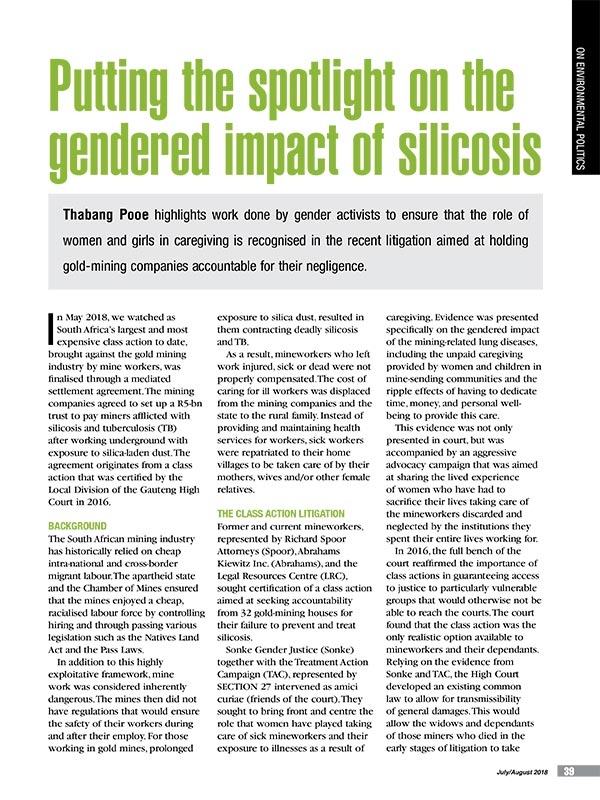 Thabang Pooe highlights work done by gender activists to ensure that the role of women and girls in caregiving is recognised in the recent litigation aimed at holding gold-mining companies accountable for their negligence. This article was first published in the South African Labour Bulletin – July/August 2018. 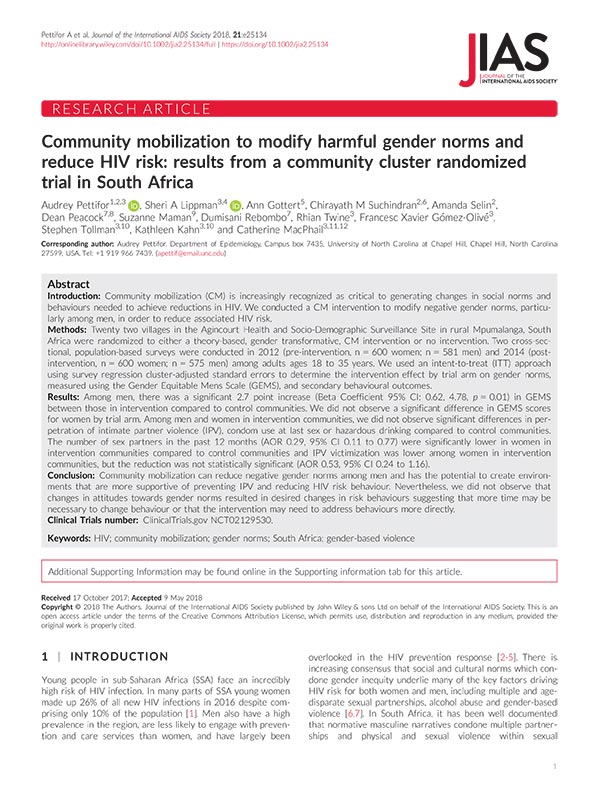 Community mobilization (CM) is increasingly recognized as critical to generating changes in social norms and behaviours needed to achieve reductions in HIV. We conducted a CM intervention to modify negative gender norms, particularly among men, in order to reduce associated HIV risk. 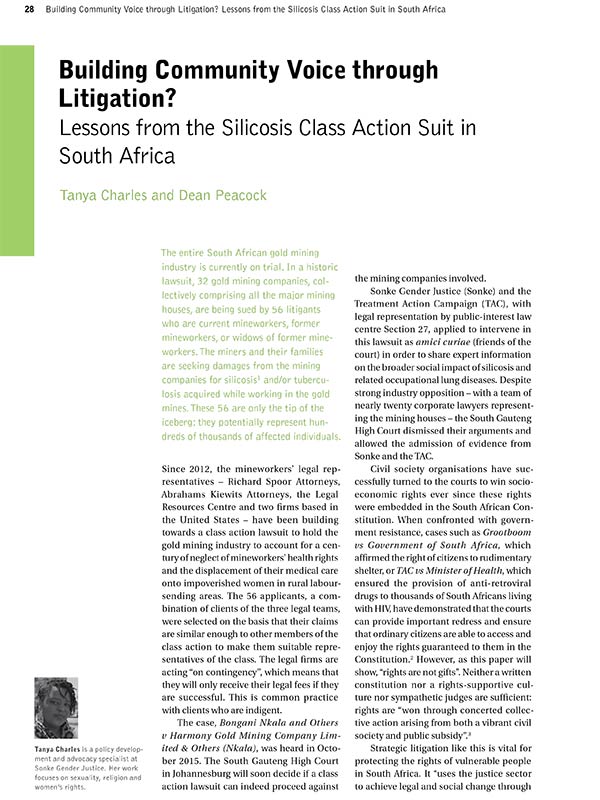 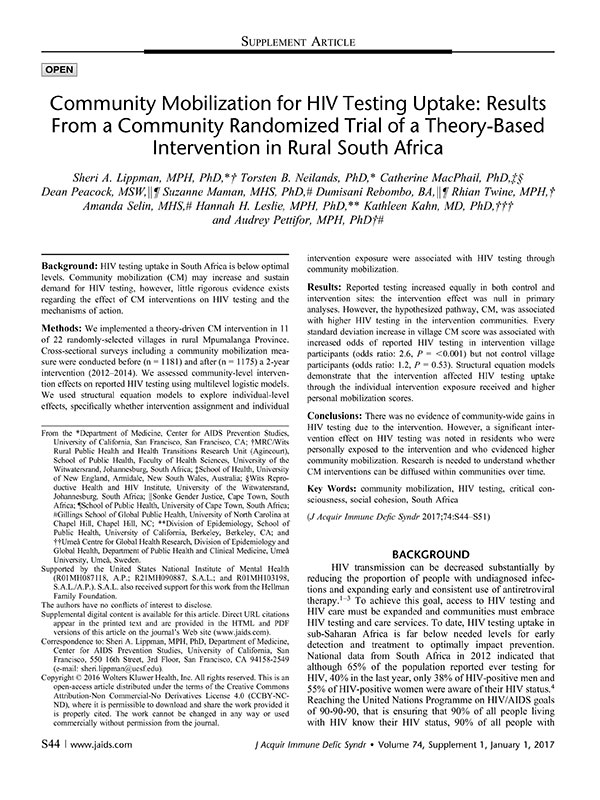 HIV testing uptake in South Africa is below optimal levels. Community mobilization (CM) may increase and sustain demand for HIV testing, however, little rigorous evidence exists regarding the effect of CM interventions on HIV testing and the mechanisms of action. We implemented a theory-driven CM intervention in 11 of 22 randomly-selected villages in rural Mpumalanga […]

What role can gender-transformative programming for men play in increasing men’s HIV testing and engagement in HIV care and treatment in South Africa? 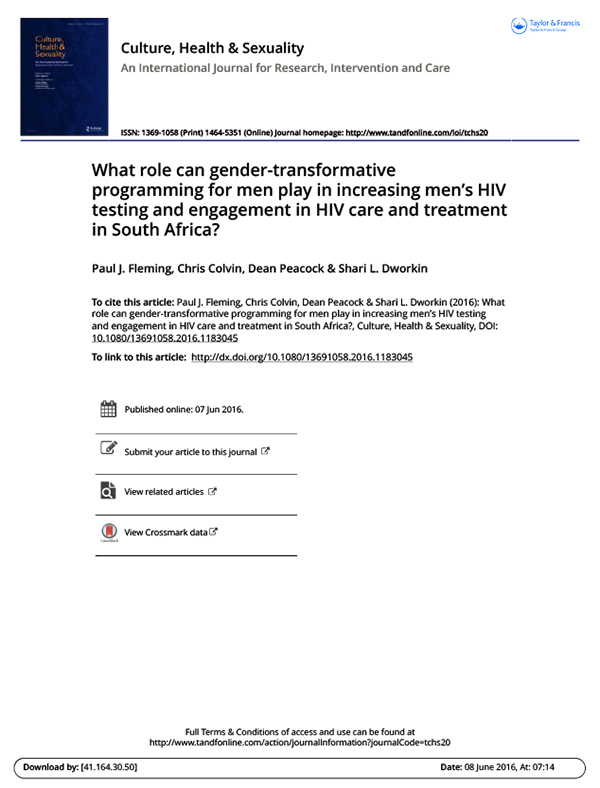 Men are less likely than women to test for HIV and engage in HIV care and treatment. We conducted in-depth interviews with men participating in One Man Can (OMC) – a rights-based gender equality and health programme intervention conducted in rural Limpopo and Eastern Cape, South Africa – to explore masculinity-related barriers to HIV testing/care/treatment […] 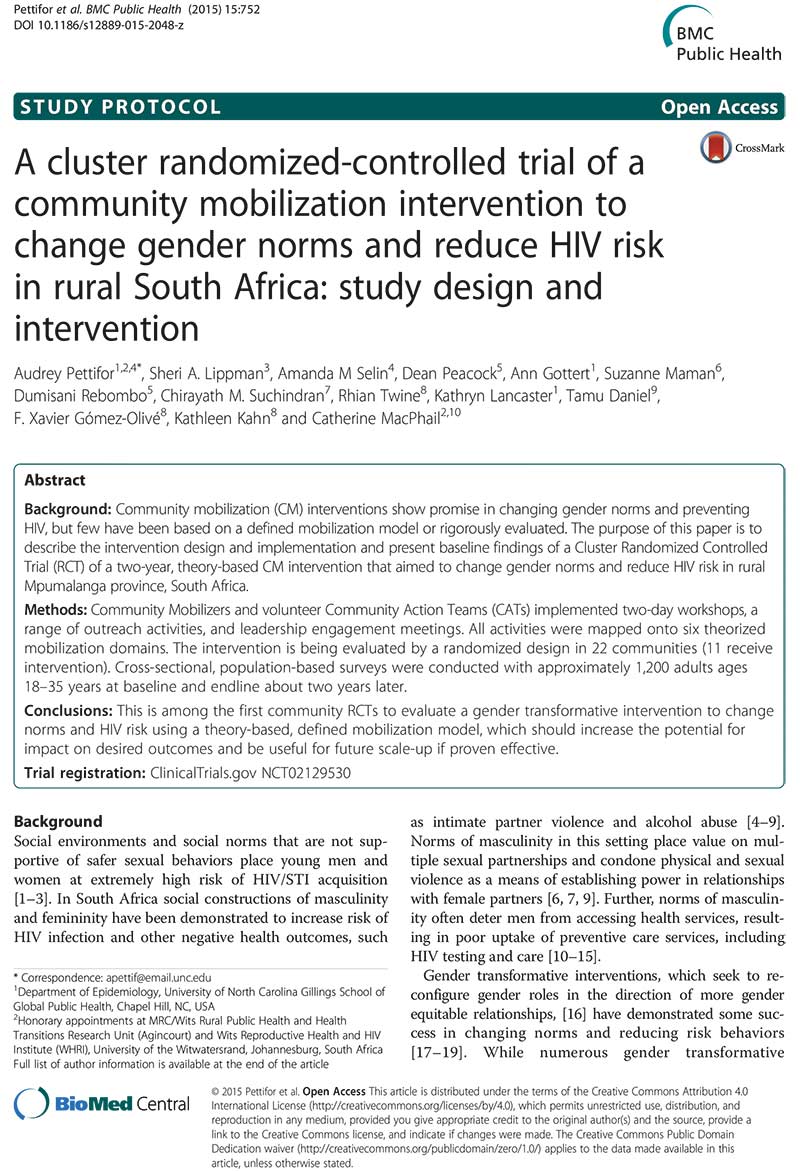 This paper provides an analysis of the design and implementation, as well as to provide baseline findings, of the One Man Can trial. The One Man Can trial is a cluster randomised controlled trial implemented in the Bushbuckridge area of the Mpumalanga province over two years, with the aim of mobilising communities to change gender […] 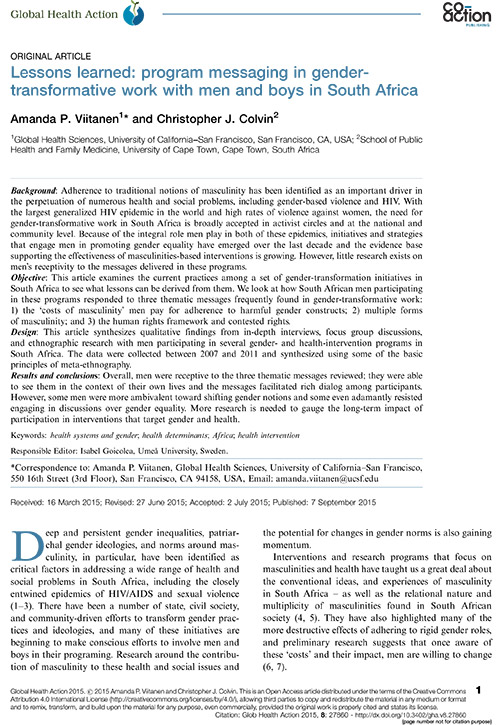 Background: Adherence to traditional notions of masculinity has been identified as an important driver in the perpetuation of numerous health and social problems, including gender-based violence and HIV. With the largest generalized HIV epidemic in the world and high rates of violence against women, the need for gender-transformative work in South Africa is broadly accepted […]

Improving Men’s Participation in Preventing Mother-to-Child Transmission of HIV as a Maternal, Neonatal, and Child Health Priority in South Africa 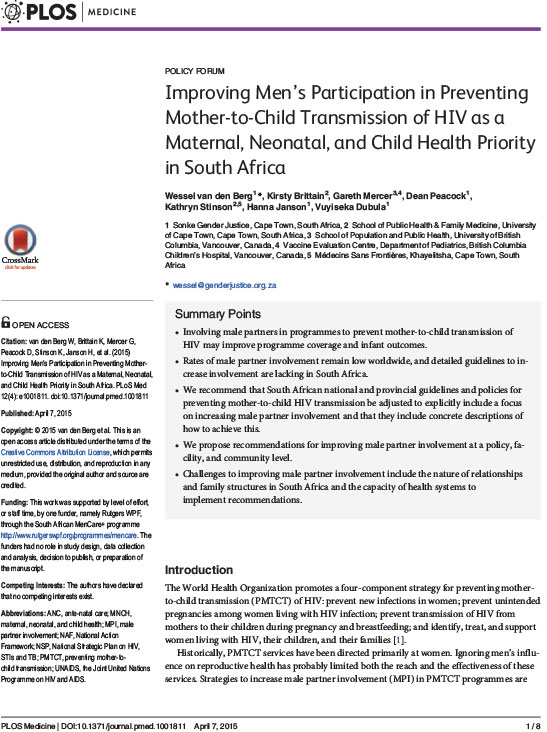 The World Health Organization promotes a four-component strategy for preventing mother-to-child transmission (PMTCT) of HIV: prevent new infections in women; prevent unintended pregnancies among women living with HIV infection; prevent transmission of HIV from mothers to their children during pregnancy and breastfeeding; and identify, treat, and support women living with HIV, their children, and their […] 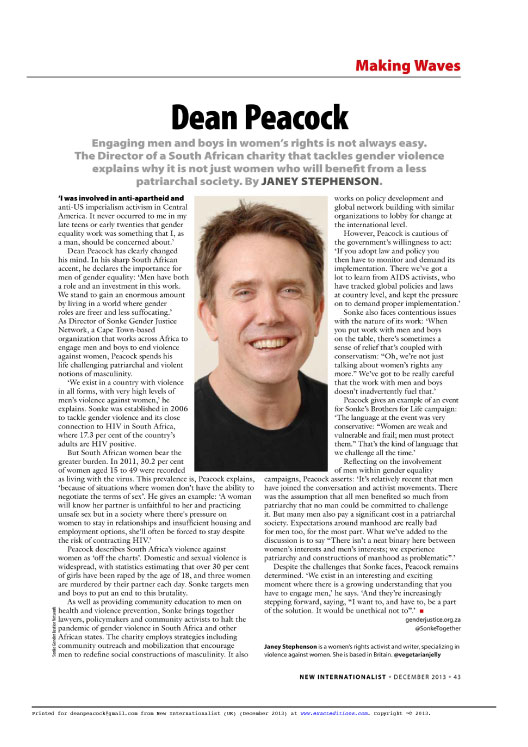 Engaging men and boys in women’s rights is not easy. The Director of South African charity that tackles gender violence explains why it is not just women who benefit from a patriarchal society. 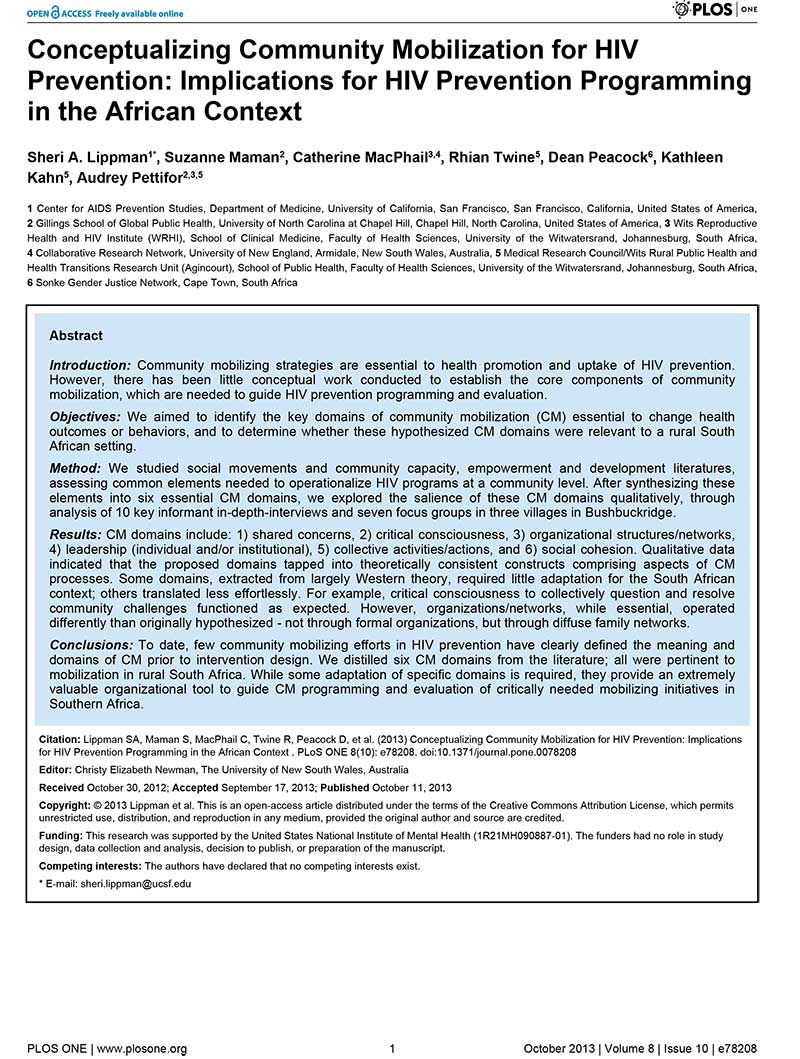 This paper aims to identify the key domains of community mobilization (CM) essential to change health outcomes or behaviors, and to determine whether these hypothesized CM domains were relevant to a rural South African setting. We studied social movements and community capacity, empowerment and development literatures, assessing common elements needed to operationalize HIV programs at […] 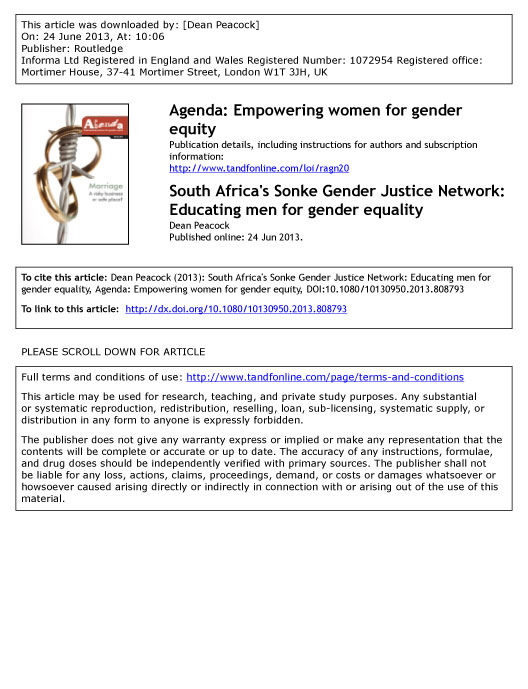 In its effort to organise men to prevent gender violence Sonke’s work has grown rapidly and is recognised both nationally and internationally. Its largest project, the One Man Can Campaign, an education and outreach programme with men to challenge harmful gender norms and educate men for health, has been featured as an example of best […] 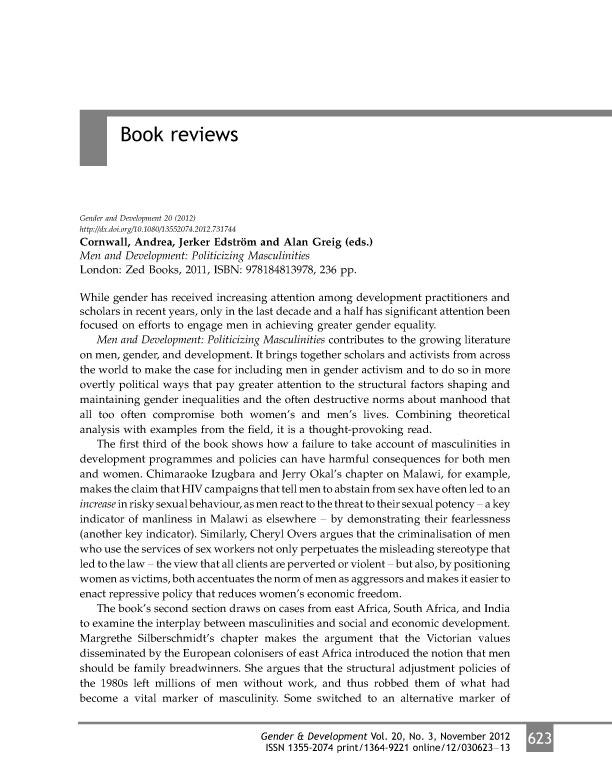 Men and Development: Politicizing Masculinities contributes to the growing literature on men, gender, and development. It brings together scholars and activists from across the world to make the case for including men in gender activism and to do so in more overtly political ways that pay greater attention to the structural factors shaping and maintaining […]

Impact of a Gender-Transformative HIV and Antiviolence Program on Gender Ideologies and Masculinities in Two Rural, South African Communities 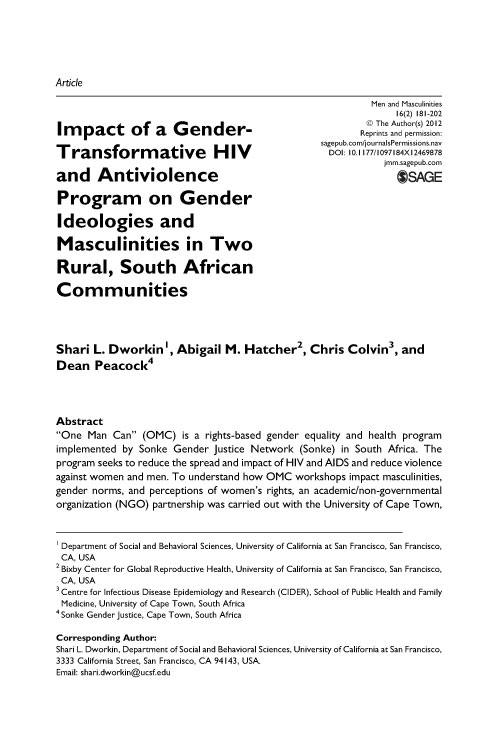 ‘‘One Man Can’’ (OMC) is a rights-based gender equality and health program implemented by Sonke Gender Justice Network (Sonke) in South Africa. The program seeks to reduce the spread and impact of HIV and AIDS and reduce violence against women and men. To understand how OMC workshops impact masculinities, gender norms, and perceptions of women’s […] 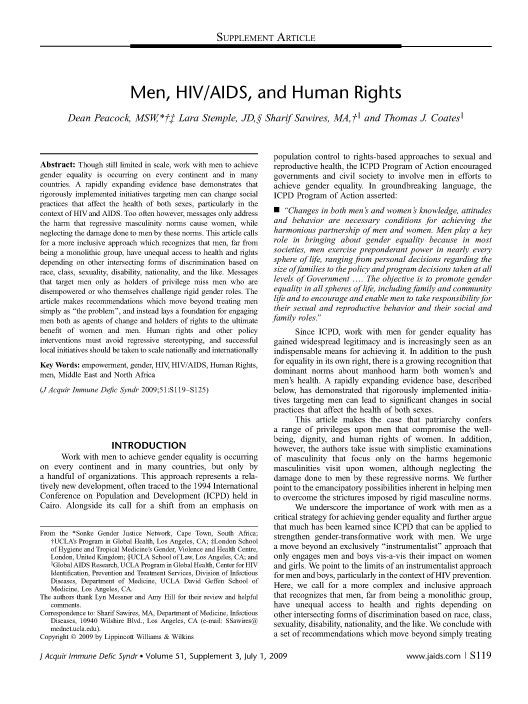 Though still limited in scale, work with men to achieve gender equality is occurring on every continent and in many countries. A rapidly expanding evidence base demonstrates that rigorously implemented initiatives targeting men can change social practices that affect the health of both sexes, particularly in the context of HIV and AIDS. Too often however, […] 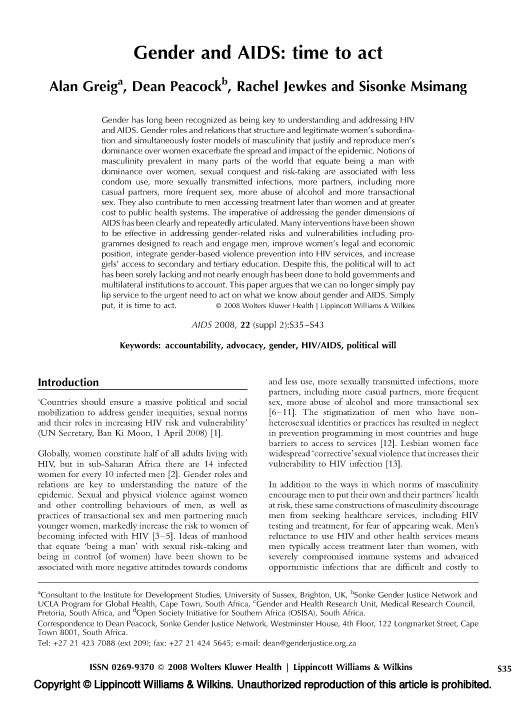 Gender has long been recognized as being key to understanding and addressing HIV and AIDS. Gender roles and relations that structure and legitimate women’s subordination and simultaneously foster models of masculinity that justify and reproduce men’s dominance over women exacerbate the spread and impact of the epidemic. Notions of masculinity prevalent in many parts of […] 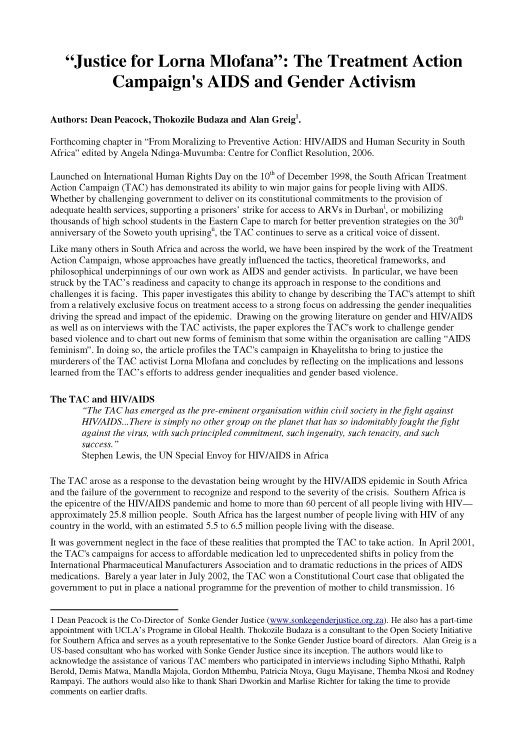 Launched on International Human Rights Day on the 10th of December 1998, the South African Treatment Action Campaign (TAC) has demonstrated its ability to win major gains for people living with AIDS. Whether by challenging government to deliver on its constitutional commitments to the provision of adequate health services, supporting a prisoners’ strike for access […] 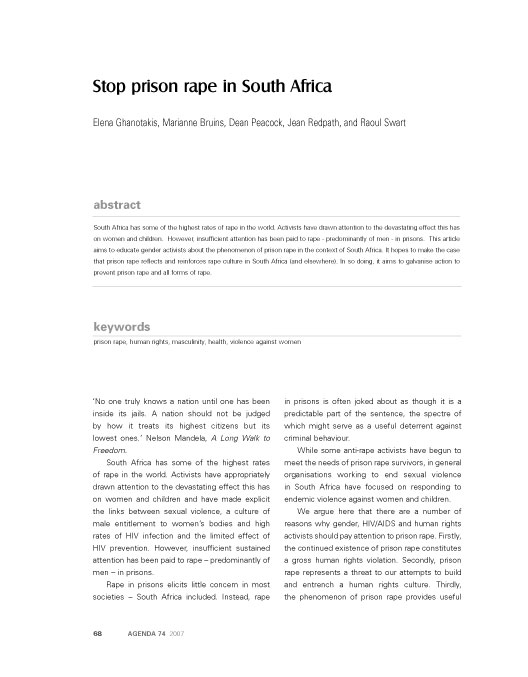 South Africa has some of the highest rates of rape in the world. Activists have drawn attention to the devastating effect this has on women and children. However, insufficient attention has been paid to rape – predominantly of men – in prisons. This article aims to educate gender activists about the phenomenon of prison rape in the […] 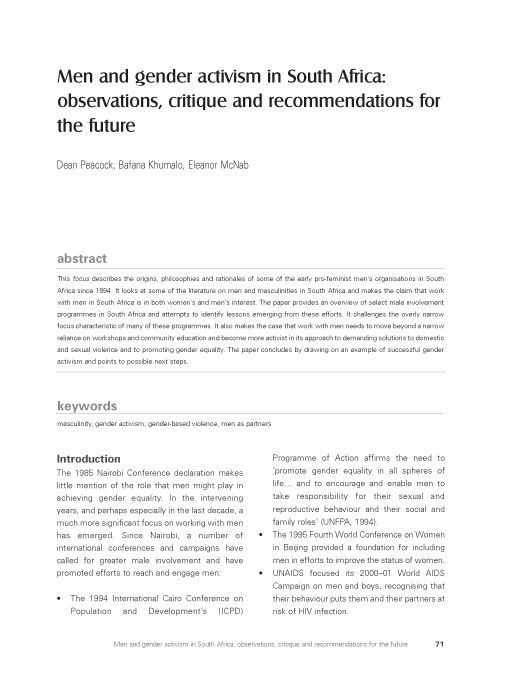 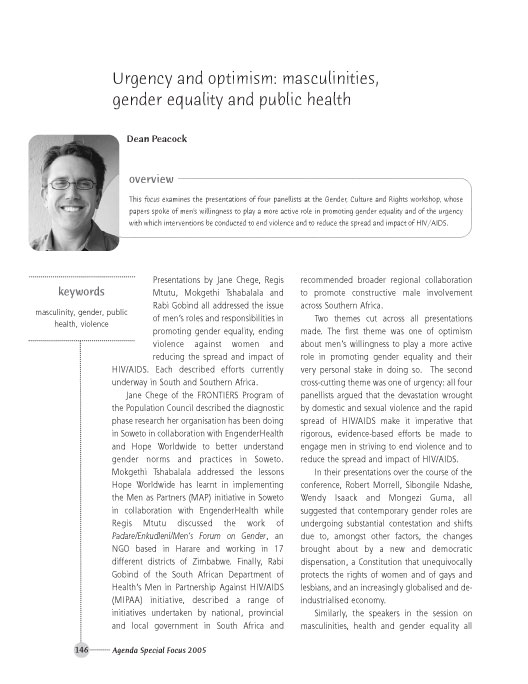 This focus examines the presentations of four panelists at the Gender, Culture and Rights workshop, whose papers spoke of men’s willingness to play a more active role in promoting gender equality and of the urgency with which interventions be conducted to end violence and to reduce the spread and impact of HIV/AIDS.

Through Men, by Men, for Men 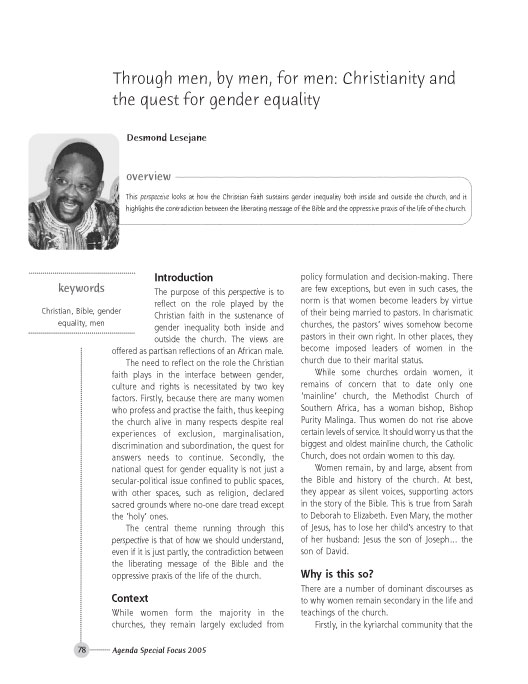 This perspective looks at how the Christian faith sustains gender inequality both inside and outside the church, and it highlights the contradiction between the liberating message of the Bible and the oppressive praxis of the life of the church.

The Men as Partners Program in South Africa 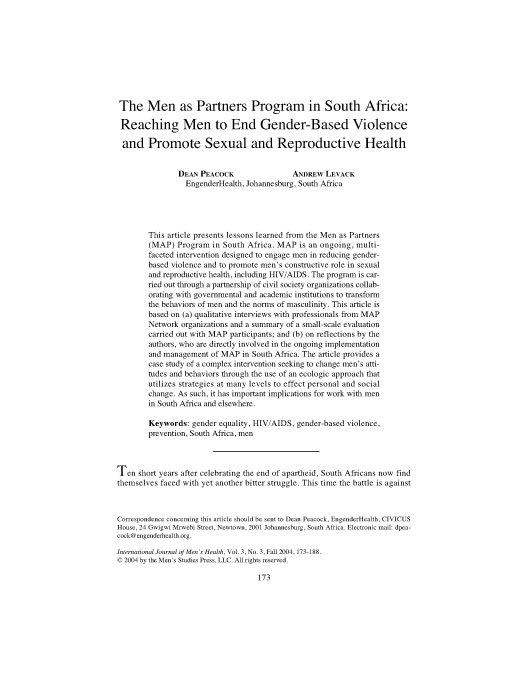 This article presents lessons learned from the Men as Partners (MAP) Program in South Africa. MAP is an ongoing, multi-faceted intervention designed to engage men in reducing gender-based violence and to promote men’s constructive role in sexual and reproductive health, including HIV/AIDS. The program is carried out through a partnership of civil society organizations collaborating […]

Building on a Legacy of Social Justice Activism 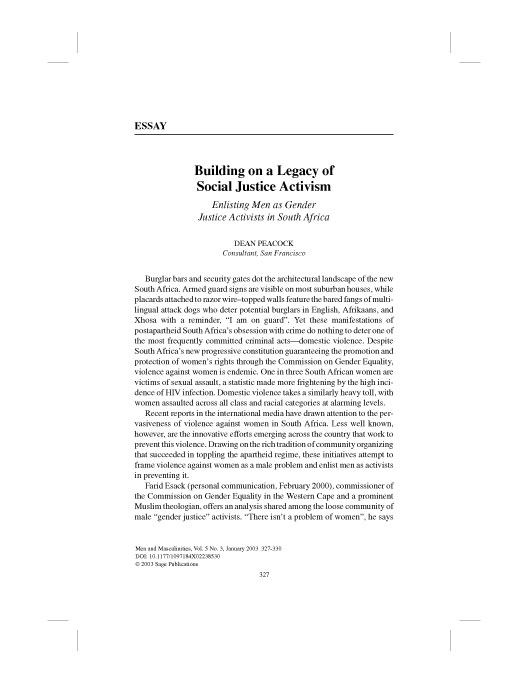 Despite South Africa’s new progressive constitution guaranteeing the promotion and protection of women’s rights through the Commission on Gender Equality, violence against women is endemic. One in three South African women are victims of sexual assault, a statistic made more frightening by the high incidence of HIV infection. Domestic violence takes a similarly heavy toll, […]