In 2010, Sonke Gender Justice produced storytelling impact pictures through its PhotoVoice project with migrant communities in Musina, Limpopo. The project encouraged boys to use photography and writings to describe their daily lives focusing on their hopes, concerns and experiences related to human rights, gender and HIV and Aids.

Leading up to this process, PhotoVoice workshops were conducted over a period of three days with 6 boys from the URC Boys shelter, a shelter funded by UNHCR. The idea behind the PhotoVoice development was to involve at least 15 boys from URC Boys shelter who previously participated in the previous One Man Can workshops. However, only 6 of the 15 boys were available for the workshops – the rest were yet to return to the shelter.

On 18 March 2010, an exhibition of the photos was done with support from the Musina municipality. Musina Mayor,  MC. Mahasela compliment Sonke, POWA and UNICEF for the great work of male involvement and exposing disadvantaged children to camera usage. She said, “I am overwhelmed by the good work done by these young men who shared their experiences in coming up with very interesting and informative photos.” In addition, the Mayor highlighted the tendency of the parents/elders to be ignorant of the needs of their children: “Children are human beings, so they need to be listened to and taken seriously”.

The boys who participated on the PhotoVoice project were awarded with their framed biographies with UNICEF and Sonke logos. The biographies were written by the boys themselves, narrating their backgrounds and their aspirations. “I am happy to have my biography and I will take it to my mom when I go home,” the boy said with tears of joy in his eyes. 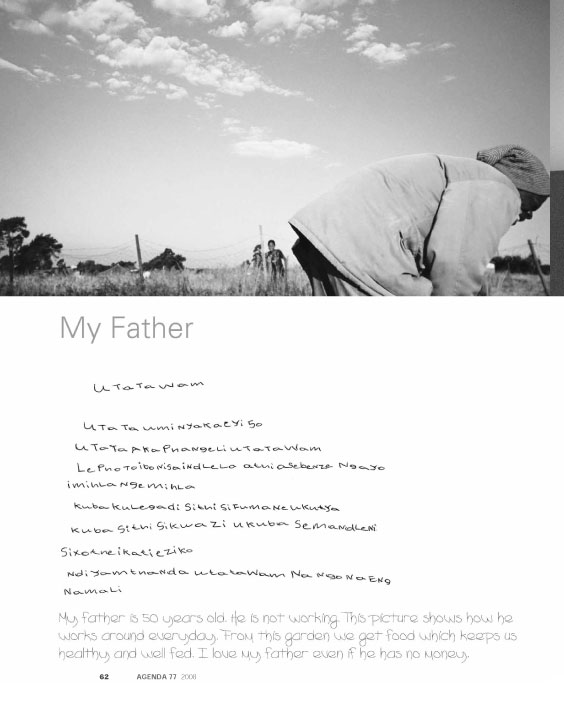