The following report documents the feedback generated from 28 interviewed stakeholders including funders, researchers, policy specialists, directors, program officers, communication leads, technical advisors, evaluators, and consultants from a variety of regions to inform developments of and recommendations to the MenEngage SRHR Initiative. The stakeholders interviewed had a wealth of experience in SRHR, including in women’s SRHR and access. Expertise in the latter area was critical to privilege a feminist perspective of the initiative and to lay a foundation for meaningful partnership with women’s SRHR efforts. Stakeholders were purposefully recruited through the networks of Sonke, Promundo and MenEngage. The stakeholders interviewed represent those who were available and willing to be interviewed.

Overall, stakeholders strongly supported and valued the necessity of the initiative. There was much agreement that SRH services, policies and programs engaging men were limited and/or not inclusive of men wanting to be involved. There was general consensus of the need to integrate the initiative with efforts supporting and advocating for women’s SRHR, to promote gender equality by addressing harmful social and cultural norms, and engage with aspects of sexuality and masculinity. Using a human rights and positive sexuality framework, and foregrounding the initiative’s aim to improve men’s SRHR, would be useful to motivate men’s involvement. 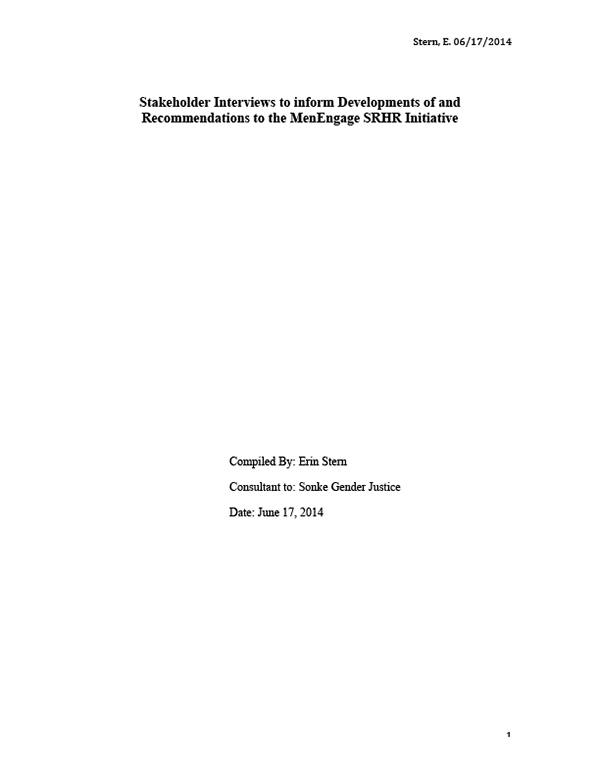