Sonke Gender Justice (Sonke) welcomes the opportunity to make submissions to the Department of Social Development (DSD) on the Discussion Document on Corporal Punishment and Discipline in the Home (Discussion Document).

Sonke is a non-profit, human rights and social justice organisation that strives to achieve gender equality, prevent gender based violence and reduce the spread of HIV and the impact of AIDS through local and regional work to strengthen government, civil society and citizen capacity, including and focusing on the involvement of men and boys for gender equality.

This is submission is made by Sonke, from the perspective of the MenCare global fatherhood campaign. MenCare is a global fatherhood campaign co-coordinated by Sonke. It is aimed at promoting men’s involvement as equitable, non-violent fathers and caregivers in order to achieve family well-being and gender equality. Globally, a body of evidence confirms that engaged, responsive fatherhood and men’s participation in their children’s lives have positive effects for women, children and men themselves. A recent global review of interventions commissioned by the World Health Organization affirm that the involvement of men (assuming that involvement is non- violent, responsive and sensitive) is generally positive for children in terms of physical and mental health, cognitive and social development, and for developing more gender equitable attitudes. This positive impact shows up both in the short-term and in the long-term in cases where longitudinal data exists. 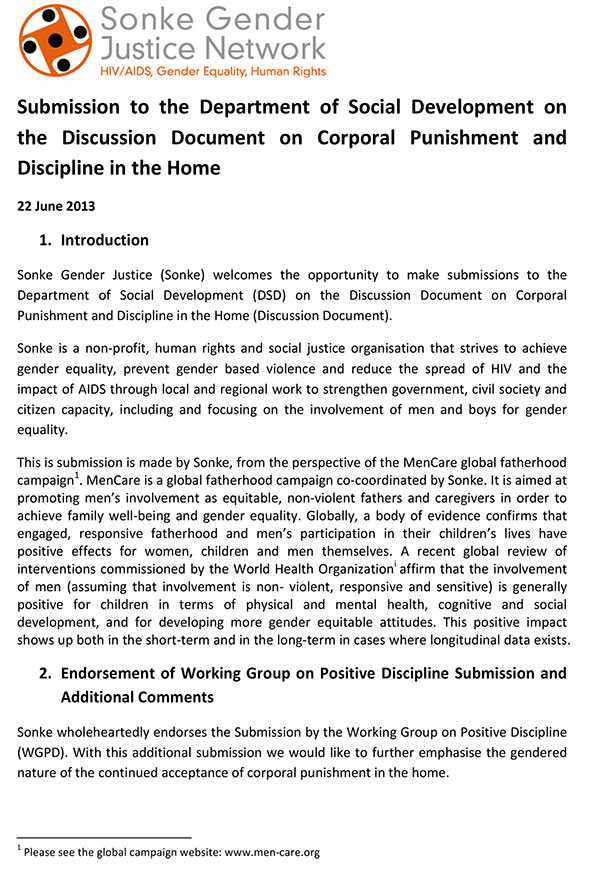