One Man Can partners with community radio stations and local government

Community radio stations (CRSs) are local radio stations that are run by and serve their communities. For many South Africans, CRSs are vital media for accessing information and news, particularly about their local and surrounding areas. People in rural areas often have no access to local newspapers or are unaware of their existence. It is much easier to source national newspapers and receive national news on TV and national radio stations. CRSs usually air a variety of programmes including entertainment, education and news, and of course, music. 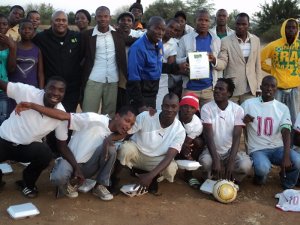 For these reasons, Sonke identified that CRSs are a great way to educate people living in rural and hard-to-reach areas of the country about gender equality, HIV and AIDS and human rights. In April 2010, we began to collaborate with radio stations around the country to broadcast programmes that address these issues in local languages. Our partner stations broadcast between two and four programmes per month, and we develop materials that are pertinent to the stations’ local communities. The project, funded by the Canadian International Development Agency, has grown fantastically over its short life – we currently partner with 12 stations, and each station is affiliated with a local community based organisation. These groups help to sustain the shows and support the station and its staff. We have had amazing success with some of these partners who continue to assist stations to air programmes even when we are not available to help.

Presenters and producers at the stations are trained with Sonke’s One Man Can campaign, which covers a range of gender and HIV related issues. This helps them to be more effective in hosting and producing informative, accurate and sensitive radio shows. Most radio shows feature a guest – a Sonke staff member or member of a partner organisation – who discusses the topic at hand with the show host and listeners who call in. The stations have received an inspiringly large amount of calls from listeners, showing that the programmes have really gained ground in rallying an audience.

While we use the influence of CRSs to reach South African communities, we also attempt to help the stations forge working relationships with their local government, in turn encouraging the communities themselves to engage with government. We encourage members of the local municipality to participate in events hosted by the stations and community-based organisations (CBOs) working on gender equality, HIV and AIDS, and more. We believe that government should be active in local efforts to promote gender equality and do all that they can to prevent the spread and impact of HIV and AIDS. That means supporting organisations and events that address these issues, cooperating with these organisations and communities, and delivering services which they are required to provide, in particular, health care. 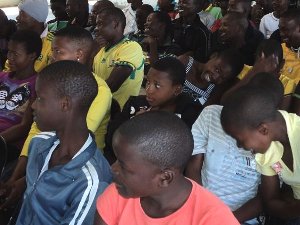 Working with and liaising between community-based organisations, including CRSs, and the government, can prove to be a tricky task. Some communities place very little trust in their local government and are hesitant to try and collaborate with them. This, however, makes holding government accountable to their duties of service delivery very difficult. Not only have communities showed unwillingness to work with government, but some government officials have also been reluctant towards assisting CBOs which work to improve their communities. Government can perceive Sonke and local CBOs as threats to their authority, afraid that we will discover and reveal their flaws. Vusi Cebekhulu, a One Man Can coordinator and a leader in the CRS project, ponders the question, “How do we convince [government] that we are not here to expose them but to help them with service delivery? …[But] if things are going wrong, how do we approach them?” However, he also provides a strategy. “It’s all about assuring them [that we’re here to help] and to develop relationships.”

Despite these challenges, our relationships with government officials have improved overall although they have been slow to grow, and have required some patience. Vusi does a lot of liaising with government on behalf of our CRS partners, and has found that continued respect and kindness have eventually led to trust and then action. Our developing alliances with municipal government in the CRSs’ localities have led to greater participation and communication between the government and local CBOs. Successfully fostering collaborative and trusting relationships between community-based organisations and their municipalities has been an exciting process and continues to be a high priority in the future of the project.

One Man Can launch in Durban, a fabulous success!

One of these flourishing relationships was highlighted and strengthened in the OMC launch in Durban, KwaZulu-Natal. The mayor, James Nxumalo, addressed the crowd with positive messages about OMC and male health seeking behaviours: “I’m in full support of programmes that encourage males to come forward to teach and learn from one another… This will enable us to teach our children, especially our sons, about values of how to behave and treat women.” Ukhozi FM, a national SABC radio station, broadcasted the event live and many people called in to ask how they could participate in the One Man Can campaign.

The event also gave us the opportunity to forge new relationships with NGOs and community based organizations (CBOs) and strengthen our existing ones. We have plans for the near future to train NGO and CBO leaders with One Man Can so that they can integrate the campaign into their own work and support their community radio stations. 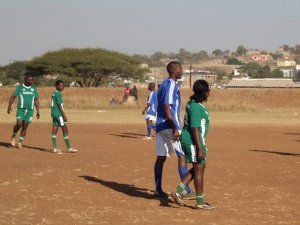 In addition to the successes of the OMC launch, our CRS project hosted a crowd-pulling community youth dialogue in Jozini with our partner Maputaland community radio. The event provided a non-judgmental and open space for young people to talk about gender based violence, gender equality and HIV and AIDS. For many of these young people, these issues are reserved for discussion by elders in the community only. They expressed that they often feel silenced and unable to speak freely when engaging with the elders and traditional leaders in their communities, even though they are affected by these issues both at school and at home. The event was planned to take place in June – youth month – but because of hiccups with funding, we held it a little later, in early July.

We believe that all events, especially those aimed at youth, should not only include educational components, but be fun, relevant and vibrant. A troupe of young, local traditional dancers performed and sang Masikandi – described by some as a type of Zulu folk music. We also organised a soccer tournament with four local teams – three all-male teams and one all-female team. We used this gender dynamic to stimulate debate about gender norms. Although the female team put up a good fight, they were closely beaten by an all-male team. However, the question of how the men would feel if they were beaten by a women’s team initiated thought-provoking discussion among the players. Men admitted that they would feel especially bad being beaten by women, and this was a great springboard to introduce issues of gender equality.

We received huge support from the Jozini municipality and local CBOs, and KwaZulu-Natal wildlife provided meat for the day’s lunch. The previous mayor of the Jozini municipality, a woman, was energetically supportive of OMC and our relationship with Maputaland community radio. We were slightly anxious that if she were to leave her position after the 2011 municipal elections, our relationship with the municipality would begin to founder. So we were delighted when the new mayor picked up right where she left off and threw his weight behind our campaign and objectives. We have received overwhelming support from the Jozi municipality and are grateful to them for their eagerness to get involved with the projects working with their constituents.

Possibly the most exciting outcome of the Jozini event was the young people’s desire to set up a monthly forum, supported by the municipality, for them to discuss issues of HIV, healthy relationships, health seeking behaviours, gender equality, gender based violence and other matters which are difficult for them to talk about elsewhere. The municipality was keen and supportive of the initiative. In the past, a forum like this existed but the youth found it too influenced by a political agenda. They are currently calling for a platform independent of political bias.

Finally, the municipality and Maputaland community radio requested that Sonke assist to set up a similar event for women’s day in August. The groups have had events in past years but felt that they made little impact. People seemed to really enjoy the method of engaging in a dialogue event, finding it effective and that it promoted greater understanding of one another and solidarity within the community.

Thanks to all
All of our staff involved with the project are thrilled with its successes so far, and are dedicated to continuing their hard work, which is time-consuming and often requires a lot of time spent away from home. We congratulate the whole team.