Speaking at the Botswana and Swedish “Dads Photo Exhibition” launch, the founder of MBGE – Demond Lunga said: “We want to encourage men to be part of care giving work in the home because we realized that a lot of women still live in poverty because they are forced to take care of their kids and they are not able to go out there and get education and be able to work.”

He noted that it is also important for them as men to own up and say; “we also want to be part of bringing up a child to bond with them, to be involved in the care work within families because that way it will give equal opportunities for both parents and for the child to get positive role models from the parents.”

Adding that research has also shown that men who are part of the delivery process are less likely to use violence and they are always there for their children.

Further he said from the beginning, unfortunately from nature women are the ones to carry the child but the least they can do as men is to support them through the process.

“Most Botswana men are scared of delivery room but I have been to all my deliveries as I got 3 kids. First delivery I cried because she was in pain and there was nothing I could do but I was there to support and when the baby came, it changed my life. It made me respect her more, “he added.

Lunga said if men are kept away, they are not able to go through the process, as to the pain and stress of which their partner has to go through.

However he said, “When we started the men care program in Botswana it was quite a challenge because our cultural practices do not allow men to be in the delivery room or take care of the child just after delivery.”

He stated that they had to go back into the communities and start the conversation and they realized they were so much rich information and the biggest challenge is to break it down.

“They are about 3 reasons why men are not to be in the delivery room; 1.To make sure that they is child spacing, so the 3 months will ensure you do not have sex with your partner 2. They also talked about the immune system of the child as back then men were hunters and gathers, and will come back with some infections that may affect the child 3. They also talked about the bonding of the child and the umbilical cord and the fact that there were spiritual beliefs that if the father had to have sex with anybody else but the mother the child will come with syndromes,” Lunga said.

Hence the exhibition through the campaign entitled “Men Care”, as to reach out to men across the country with their message, aiming to make them aware of what it really means to be a father.

Meanwhile the Chairperson of National Children’s Council-Mamiki Kamanakao also stated that she has read a lot of reports that showed fatherhood should start from the moment of conception; when the baby is being conceived because that has the impact on the investment that the woman then attaches to her pregnancy.

“An investment here does not talk only about financial investment, it talks about emotional investment. And if you are a father and neglect that child during the time when they are being carried, you must know how much you are impacting in to the future of that child because of the type of investment the mother is going to bring in to that child as an unhappy mother obviously releases negative emotions into the child,” she said.

The Swedish Ambassador-Cecilia Julin said at Sweden, they have what they call parental leave just to make things clear that this is not a mother issue but it is actually a parent issue.

“You get 480 days paid for by the state not a 100 percent all the time but it is still a long period. And 90 out of the days have to be taken by the father or the mother so neither of them can fully claim the 480 days as it is natural to share it,” she said.

Julin concluded by saying as now Botswana is about to have general elections, men should go on lobby the members of parliament for the parental leave and having part of it for the fathers so as everybody can play a role in raising a child. 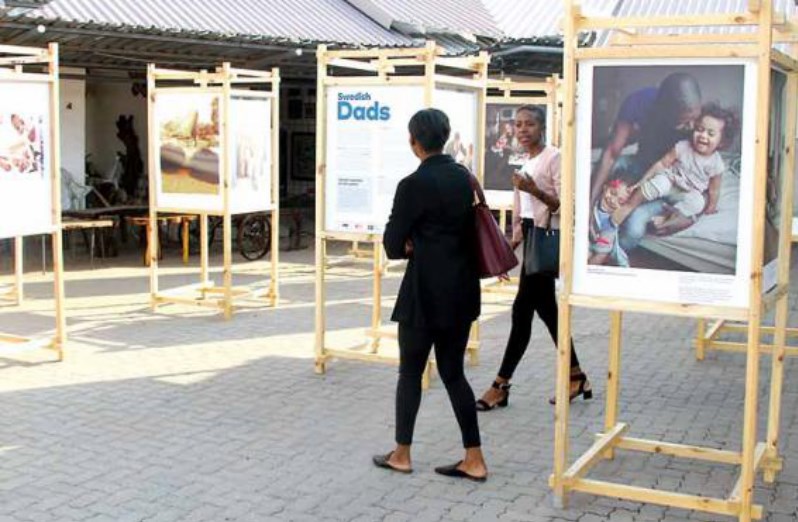