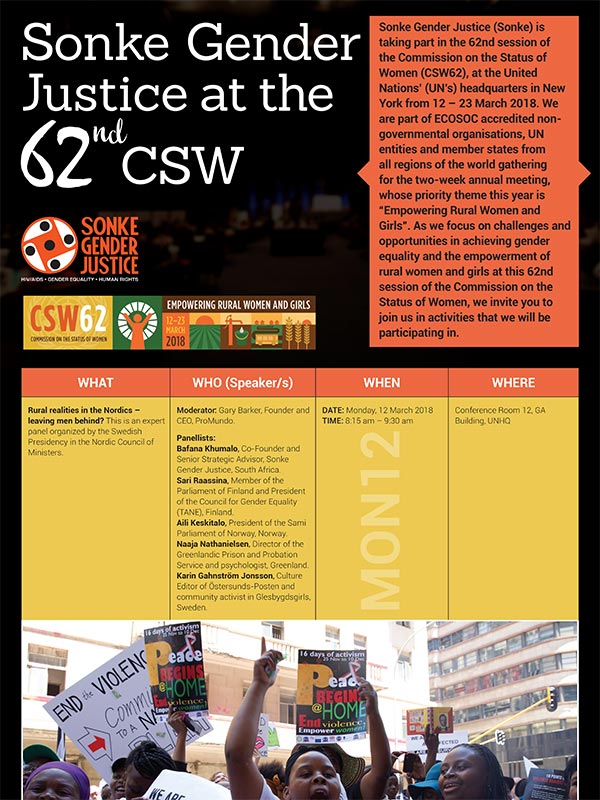 Sonke Gender Justice (Sonke) is taking part in the 62nd session of the Commission on the Status of Women (CSW62), at the United Nations’ (UN’s) headquarters in New York from 12-23 March 2018. We are part of ECOSOC accredited non-governmental organisations, UN entities and member states from all regions of the world gathering for the […]

MenEngage Africa at the 62nd CSW 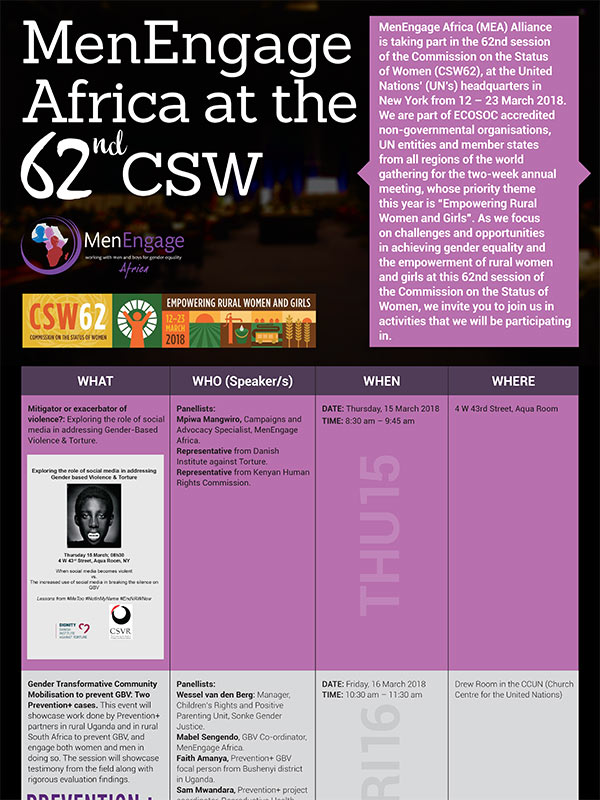 MenEngage Africa (MEA) Alliance is taking part in the 62nd session of the Commission on the Status of Women (CSW62), at the United Nations’ (UN’s) headquarters in New York from 12-23 March 2018. We are part of ECOSOC accredited non-governmental organisations, UN entities and member states from all regions of the world gathering for the […] 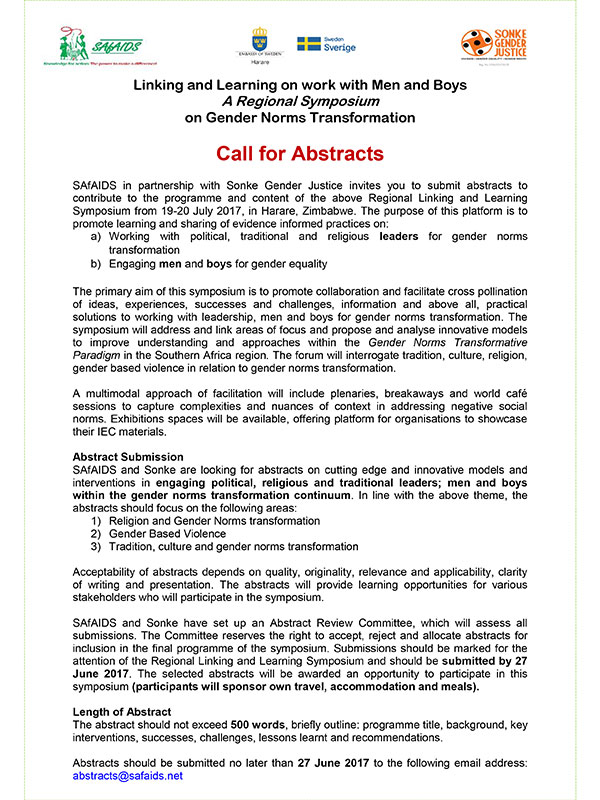 SAfAIDS and Sonke are looking for abstracts on cutting edge and innovative models and interventions in engaging political, religious and traditional leaders; men and boys within the gender norms transformation continuum. In line with the above theme, the abstracts should focus on the following areas: Religion and Gender Norms transformation Gender Based Violence Tradition, culture […]

Linking and Learning on work with Men and Boys 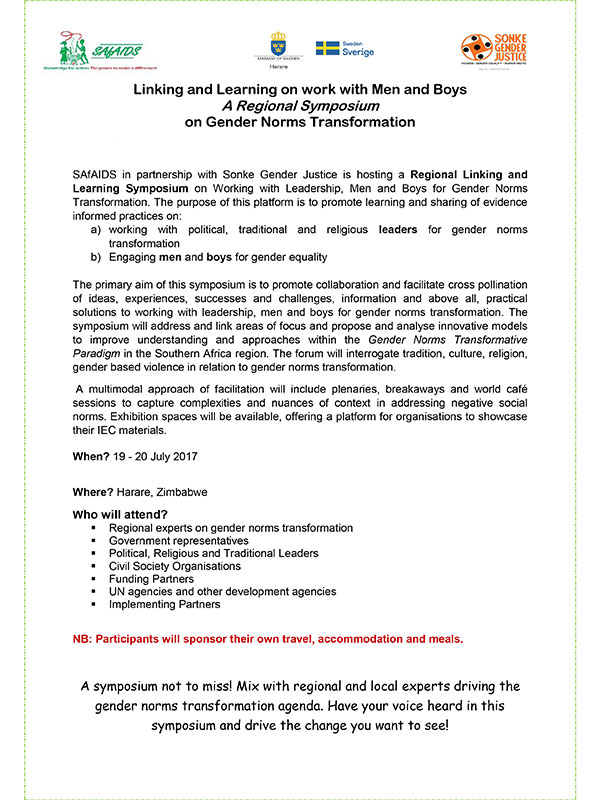 SAfAIDS in partnership with Sonke Gender Justice is hosting a Regional Linking and Learning Symposium on Working with Leadership, Men and Boys for Gender Norms Transformation. The purpose of this platform is to promote learning and sharing of evidence informed practices on: working with political, traditional and religious leaders for gender norms transformation Engaging men […] 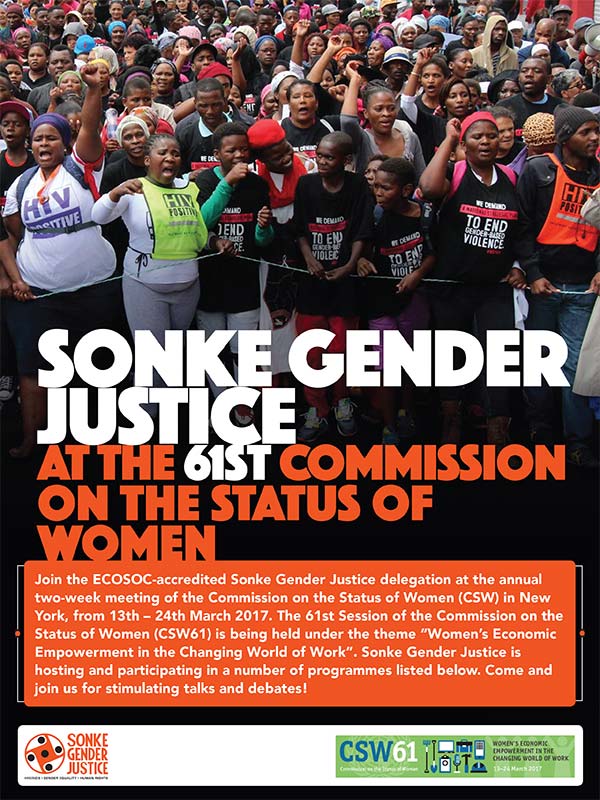 MenEngage Africa at the 61st Commission on the Status of Women 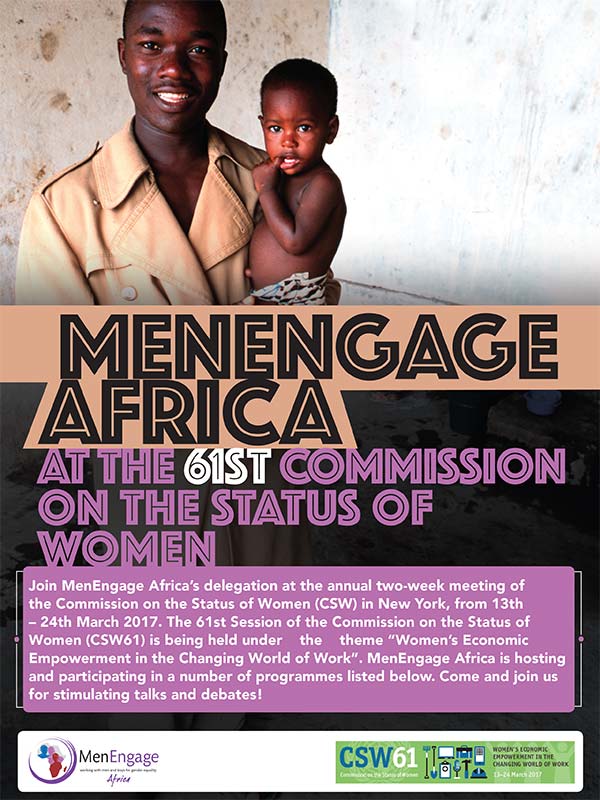 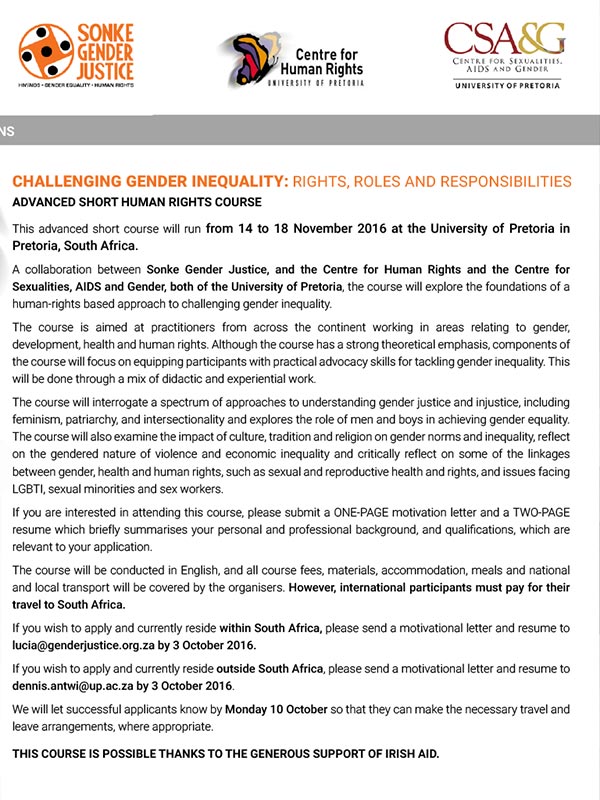 This advanced short course will run from 14 to 18 November 2016 at the University of Pretoria in Pretoria, South Africa. A collaboration between Sonke Gender Justice, and the Centre for Human Rights and the Centre for Sexualities, AIDS and Gender, both of the University of Pretoria, the course will explore the foundations of a […]

Invitation to the launch of ‘By the Grace of God’ 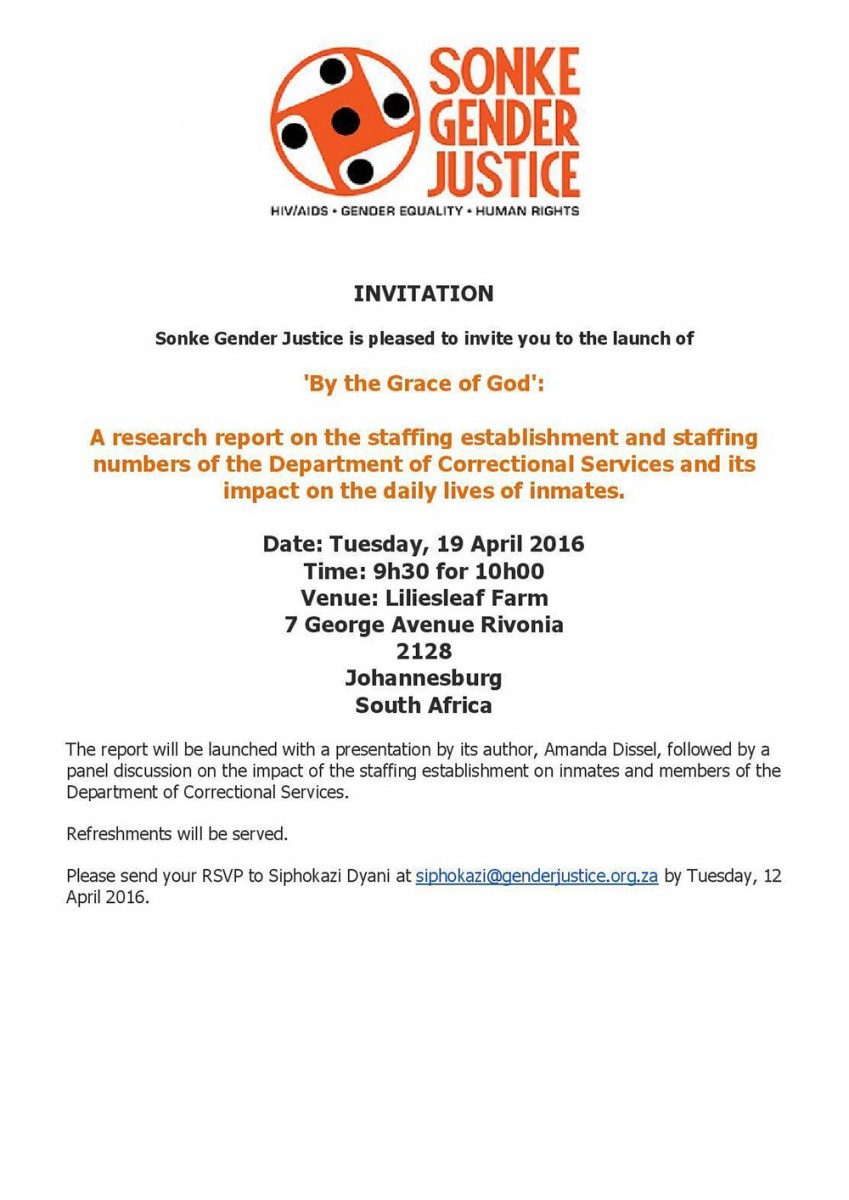 Sonke Gender Justice is pleased to invite you to the launch of ‘By the Grace of God’: A research report on the staffing establishment and staffing numbers of the Department of Correctional Services and its impact on the daily lives of inmates. Date: Tuesday, 19 April 2016Time: 9h30 for 10h00Venue: Liliesleaf Farm7 George Avenue Rivonia2128JohannesburgSouth Africa […] 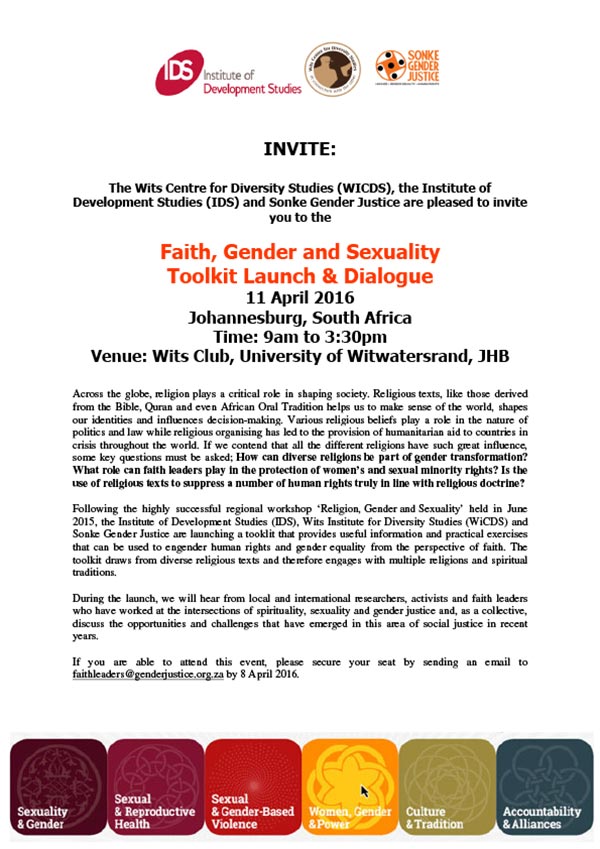 The Wits Institute for Diversity Studies (WICDS), the Institute of Development Studies (IDS), and Sonke Gender Justice are pleased to invite you to the Faith, Gender and Sexuality Toolkit Launch & Dialogue. The event will take place as follows: DATE: Monday, 11th AprilTIME: 9:00 a.m. to 3:30 p.m.VENUE: University of the Witwatersrand’s Wits Club, Braamfontein, Johannesburg. […]

MenEngage in the Organization for Security and Cooperation in Europe 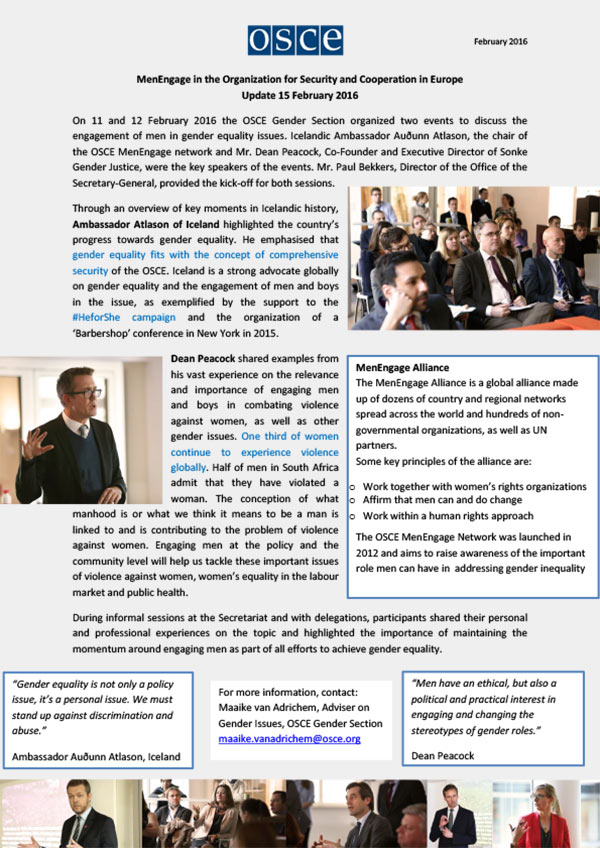 On 11 and 12 February 2016 the OSCE Gender Section organized two events to discuss the engagement of men in gender equality issues. Icelandic Ambassador Auðunn Atlason, the chair of the OSCE MenEngage network and Mr. Dean Peacock, Co-Founder and Executive Director of Sonke Gender Justice, were the key speakers of the events. Mr. Paul […] 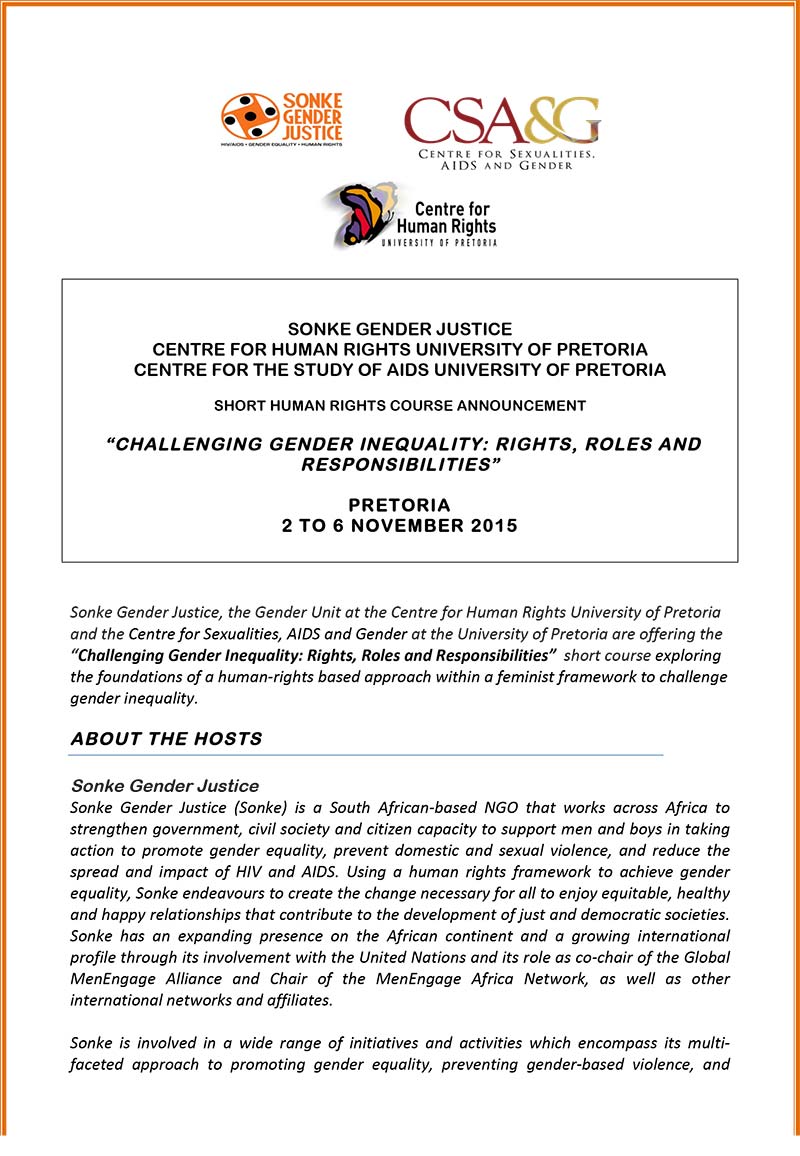 Sonke Gender Justice, MenEngage Africa, the Institute of Development Studies (IDS) and the Wits Centre for Diversity Studies (WiCDS) organised a workshop to question the role of religious texts in supporting gender and sexuality discrimination in Africa. With presentations, discussions, skills building, activities and film screenings, this programme provides an outline of the 5-day workshop […] 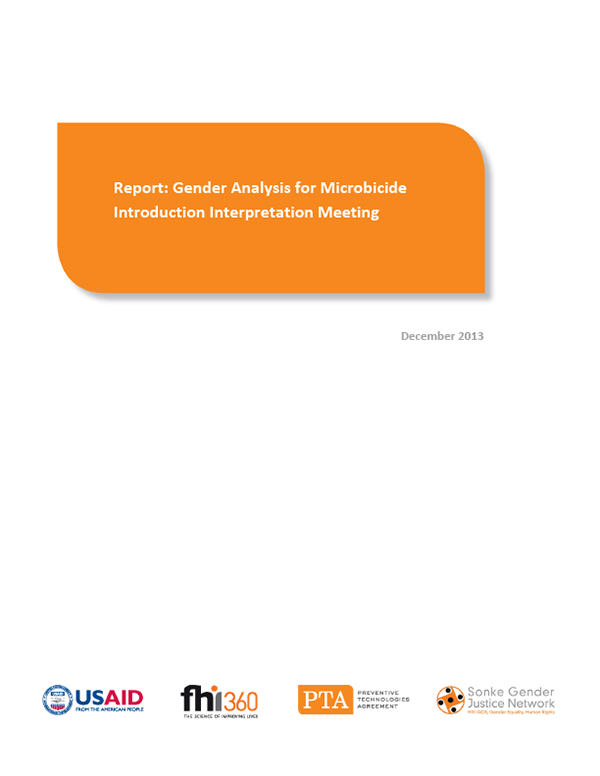 With funding from the United Stated Agency for International Development (USAID), FHI 360 and Sonke Gender Justice conducted a gender analysis in South Africa to answer the following questions: How will gender norms and inequalities affect women’s access to and use of microbicides? How will microbicide introduction affect the relative status of women and girls, […] 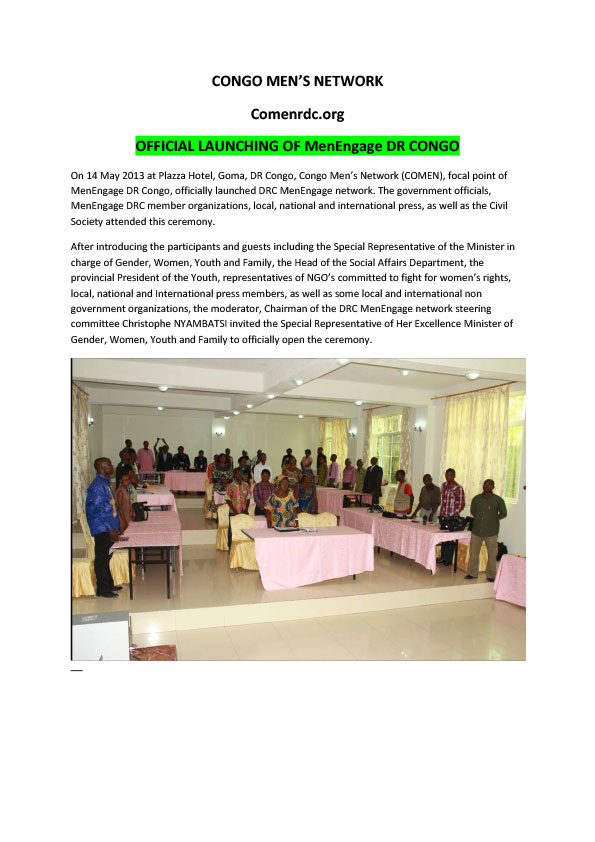