A man in the kitchen makes for an unusual sight in most places, urban or rural, in South Africa and is often accompanied by snide comments, mocking laughter or a shaking of heads in disapproval – from men as well as from women. Patriarchy remains the widely accepted social norm and gender roles are clearly divided into how men are supposed to act and how women have to behave.

Caregiving – for children, the old or the ill – is generally regarded as a “woman’s job”. Men do not cook, clean, get involved in the upbringing of their children or take care of the sick. They are seen as financial providers of their families and as the heads of households who lay the law. In one rural area in the Eastern Cape, however, all this has started to change.

A group of nine men are working as home-based caregivers with the Siyakhanyisa HIV/AIDS support group in Qumbu, 60 kilometres outside of Mthatha, to make a positive contribution to the welfare of their community. Initially ridiculed for doing work reserved for women, they have quickly become role models and earned respect for their courage to do things differently and take responsibility for the goings-on in their villages.

The men decided to get actively involved in helping others after they learnt about gender stereotypes, understandings of manhood and fatherhood during workshops run by NGO Sonke Gender Justice earlier this year. They now care for people living with HIV, bathe the bedridden, counsel, educate about HIV prevention and transmission, facilitate access to anti-retroviral treatment, refer patients to social services and assist sick persons in writing their will. They also encourage community members to test for HIV, distribute condoms and help disadvantaged school children with their homework and cook for them. This case study highlights the story of these nine men. 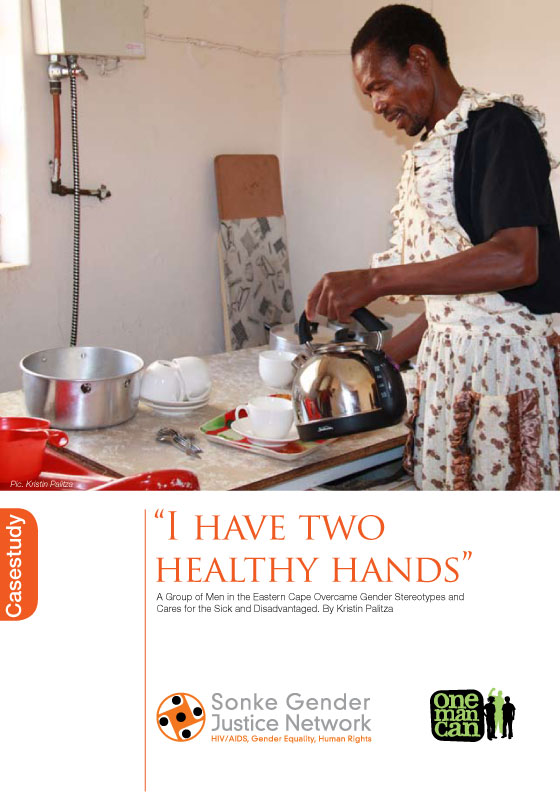