Mission to the Republic of South Africa

Since the abolition of Apartheid in 1994, the non-racial Government of the Republic of South Africa has been improving its laws and policies to meet the challenges brought about by the new dispensation of respect for human rights, human dignity, non-racialism, non-sexism and an open and democratic society. The Government has adopted a number of laws and formulated policies to conform to this new dispensation. To this end, the Government has signed and ratified numerous human rights instruments and adhered to several United Nations and Regional Treaties and Declarations relating to the treatment of offenders and detainees.

The policy of the Government in this regard seeks to turn all prisons into correctional centres and all prison officials to rehabilitators. As part of the continuing process of enhancing human rights in the country, the government has adopted an open door policy to international, regional and domestic human rights bodies to visit the country and make concrete proposals where government might be falling short. It is on this basis that the South African Government extended an invitation to the African Commission’s Special Rapporteur on Prisons and Conditions of Detention in Africa to visit the country and inspect its detention facilities.

The visit falls within the mandate of the Special Rapporteur to monitor conditions in prisons and other places of detention in Member States of the African Union and make appropriate recommendations on how to enhance the protection of persons deprived of their liberty.

The following is an account of the activities undertaken during the mission, including facilities visited, observations and findings and/or problems identified, good practices and relevant recommendations on how to enhance the protection of the rights of persons deprived of their liberty. The report is preceded by a brief overview of prison administration in South Africa. 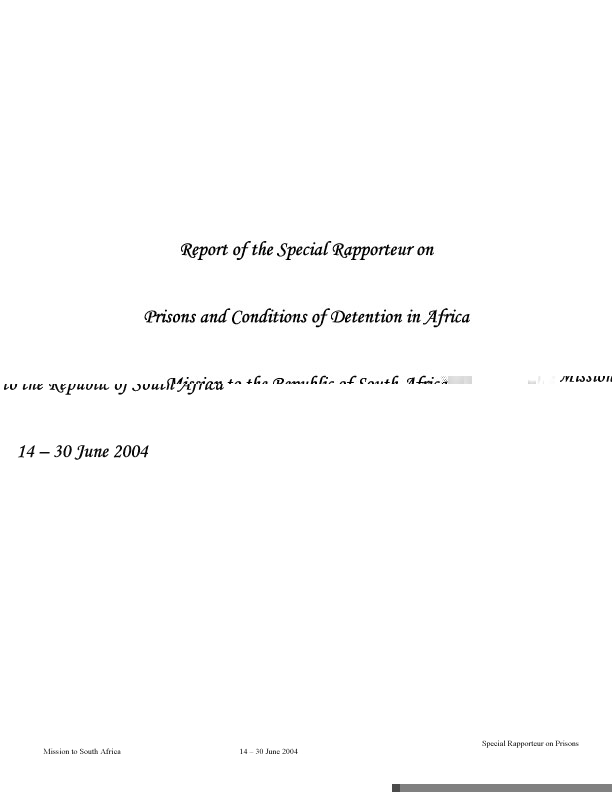