Following the Round Table on Hate Crimes, Race, Class, Gender Discrimination and Xenophobia on Thursday 8 June 2017

Sonke Gender Justice (‘Sonke’) is currently involved in a broad range of advocacy work aimed at creating the necessary change for men, women, young people and children to enjoy. Advocacy around each of its projects often has components addressing hate crimes, race, class, gender discrimination and xenophobia and creating and recommending legal interventions aimed at addressing these. We therefore have a great interest in making this submission to the High Level Panel on the Assessment of Key Legislation and the Acceleration of Fundamental Change (‘High Level Panel’).

The recommendations set out in this submission are categorised according to three themes:

In relation to our main recommendations aimed at combating gender-based violence, we have noted that the current legal frameworks in place do not adequately protect populations vulnerable to gender-based violence. Accordingly, Sonke recommends that the legal structural deficiencies in this regard be remedied.

Specifically, we recommend that:

In relation to recommendations aimed at reducing sexual violence in prisons, Sonke – as one of the key stake holders in driving the return of human rights to prisoners in South Africa – recommends that two legislative amendments be made: 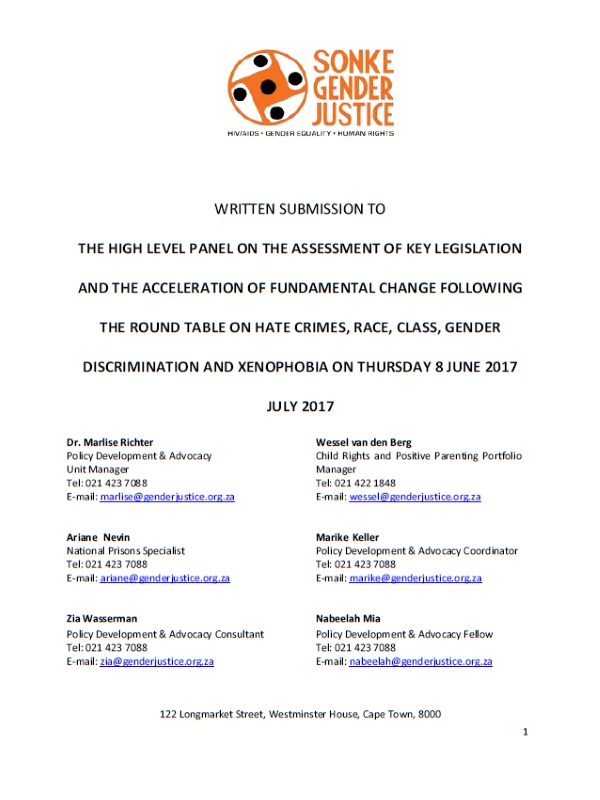