Objective. This realistic evaluation aims to study the interventions’ effect on young men between 15 and 24 years old and to extend the knowledge of program interventions concerned with reducing risky sexual behaviour while changing gender attitudes. Findings of the mixed method approach were synthesised to strengthen the program theory of this intervention.

Methods. The questionnaires were analysed with repeated measures MANOVA for the mechanisms, a PCA-analysis to validate the use of the Gender Equitable Men (GEM) Scale (Pulerwitz & Barker, 2008) and Spearman’s ρ tests to investigate correlations between the different mechanisms. Second, the active ingredients of this intervention were assessed through focus group discussions and individual interviews. These were analysed using a phenomenographic approach.

Results. Repeated measures MANOVA generated no interaction effect. Subsequent paired t- tests revealed two significant results out of four tests. The gender attitude and attitude towards condoms among the participants increased significantly. The results revealed that the Gender Equitable Men (GEM) Scale has a reliability of .6 in the pretest and .75 in the posttest. Factor analysis showed two factors, dividing the scale in ‘roles of males and females’ and ‘views on homosexuality’. Focus group interviews revealed how the intervention changed their mindset and how the contextual factors have an influence on their lives.

Conclusions. The results suggest that the intervention successfully transformed gender attitudes, and increased contraceptive attitudes. Obstacles which hindered the evaluation is the lack of SOP’s when administering the questionnaire. Furthermore, the intervention requires a follow up strategy to investigate retention rates. Lastly, the intervention needs to be part of a bigger framework to alleviate pressing circumstances of the beneficiaries. 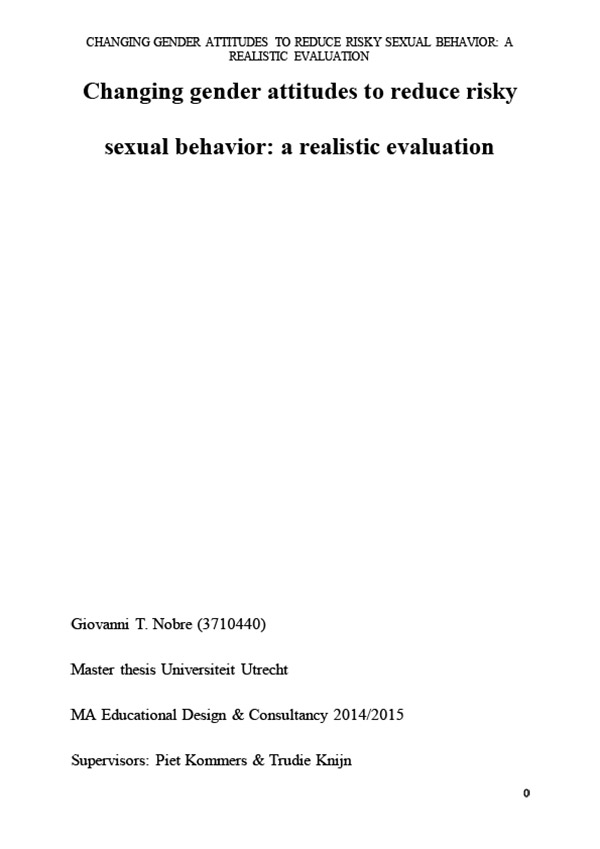