From the 24th of February to the 5th of March 2014, Sonke Gender Justice (Sonke), the MenEngage Africa Network (MEA), the Women’s Health and Research Unit at the University of Cape Town, Steps and Witness hosted the third MenEngage Africa Training Initiative (MATI) training entitled ‘Media, Film and Gender Advocacy Workshop’ in Cape Town, South Africa. The first two MATI training courses; ‘Masculinities, Leadership and Gender Justice’ brought together individuals from government, UN agencies and civil society to increase their capacity to lead gender justice programmes that engage men as partners and agents of change. These were hugely successful with over 800 applications for participation received for both overall. For its third iteration, Sonke and partners decided to adapt the programme in order to focus on other key influencers that tend to be overlooked in trainings and workshops designed to increase knowledge and skills on gender and human rights. Thus, in 2014, filmmakers were invited to learn more about gender, human rights and public health with a special focus on men’s roles and responsibilities in relation to these key areas, thus, breaking new ground for the MenEngage Africa Training Initiative.

The main objective of the workshop was to facilitate the production of films for social change in the areas of gender justice, human rights and public health within the African continent in addition to increasing the skills and capacities of filmmakers working in the field of gender justice. A total of 26 amateur and professional filmmakers, media practitioners and activists from 12 African countries attended the workshop. Overall, participants found the workshop very useful. They received new information, the objectives were met and the workshop covered topics they wanted to know about. 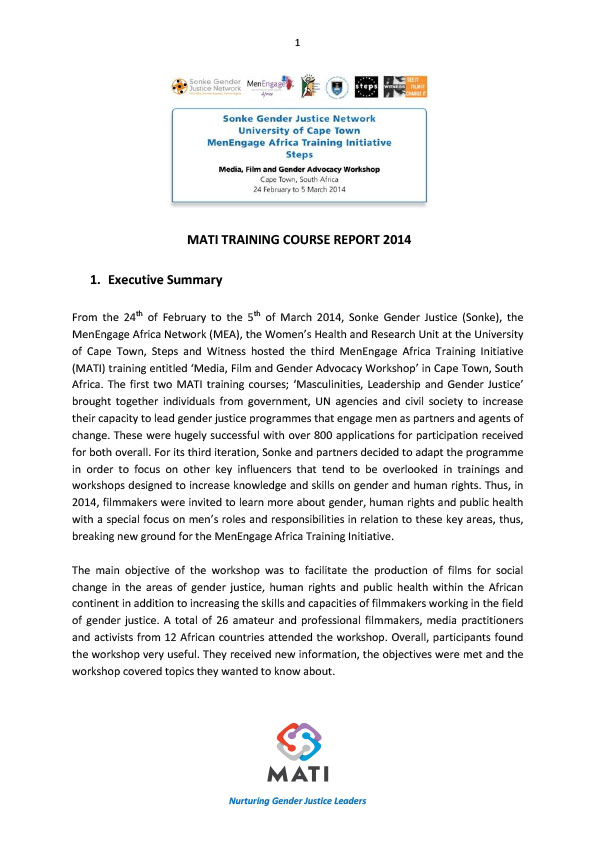