Prevention and Combatting of Hate Crimes and Hate Speech Bill

The Hate Crimes Working Group (HCWG) welcomes the opportunity to make submissions on the draft Prevention and Combatting of Hate Crimes and Hate Speech Bill (the Bill). We also wish to heartily congratulate the Department of Justice and Constitutional Development (DOJ) on this draft Bill, which has been long-awaited by civil society.
The HCWG is a multi-sectoral network of civil society organisations set up to spearhead advocacy and reform initiatives pertaining to hate crimes in South Africa and the region.

Members of the network range from grass-roots to academic institutions, and work in diverse sectors including religion, sexual orientation, gender identity and gender expression, migrants / displaced groups, disability, health status, nationality and ethnicity. All share a common concern on the impact of hate crimes in South Africa from the perspective of the victims or from a legal, service provision, research-based or advocacy perspective.

This submission will deal with each of the provisions of the Bill in turn, with the aim of offering constructive criticism, and alternative wording where applicable. 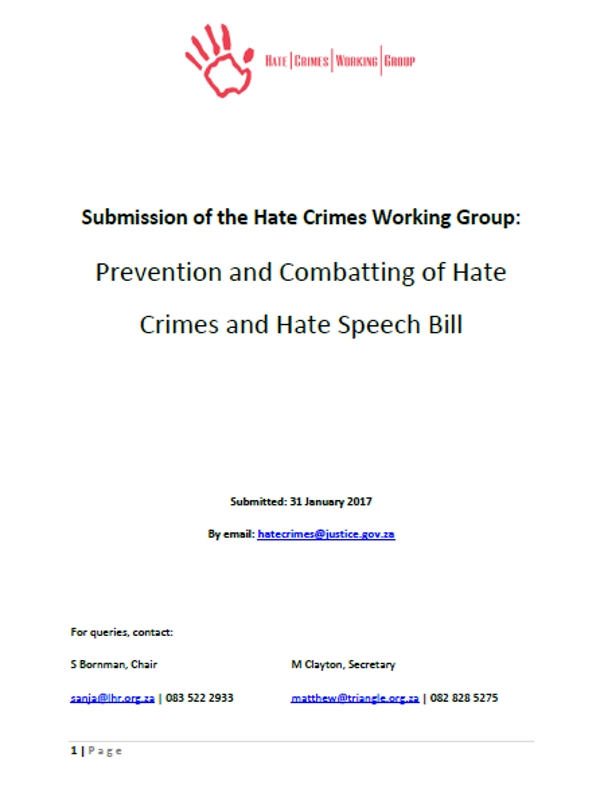