Submissions on the Children’s Amendments Bill B18-2020

Sonke Gender Justice is a non-partisan, non-profit organisation, established in 2006. Today, Sonke has established a growing presence on the African continent and plays an active role internationally. Sonke works to create the change necessary for men, women, young people and children to enjoy equitable, healthy and happy relationships that contribute to the development of just and democratic societies. Sonke pursues this goal across Southern Africa by using a human rights framework to build the capacity of government, civil society organisations and citizens to achieve gender equality, prevent gender-based violence and reduce the spread of HIV and the impact of AIDS.

Sonke has worked in various ways to promote positive parenting practices that include positive discipline strategies, a healthy supportive relationship between co-parents and supporting a child’s education, health and wellbeing. To encourage even wider acceptance of nonviolent parent-child relationships, Sonke drives a national, multipronged campaign to prohibit corporal punishment in all spaces in South Africa, and to promote the use of positive discipline strategies by parents.

Sonke welcomes the opportunity to make written submissions on the amendments to the Children’s Bill. Sonke’s submissions will focus primarily on the aspects of corporal punishment (Part 1) and its relation to ending violence of all forms against children, and on the rights of unmarried fathers in Part 2. Should the opportunity arise, Sonke would also be available to make oral submissions in parliamentary hearings on the same sections. 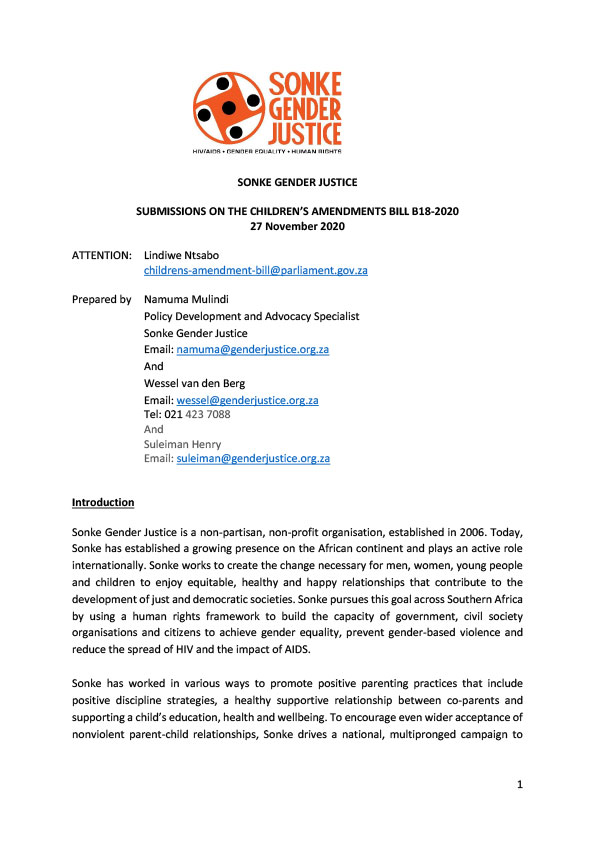