Africa Belongs to All Those Who Live and Work in it

South Africa prides itself on having one of the most progressive constitutions in the world. The Bill of Rights guarantees a host of basic political, cultural and socio-economic rights to all who are resident in the country. Yet refugees and migrants face great difficulties in accessing information and services, often due to legal insecurities, language and cultural barriers, discrimination and the frequent refusal by officials to provide services to which they are constitutionally entitled. Similarly, refugees and migrants are often overlooked in local HIV and gender-based violence (GBV) prevention efforts.

Apart from being faced with frequent human rights violations, refugees and migrants sometimes experience amplified GBV and power struggles in their communities due to a breakdown in traditional community support structures, including families and a friendly familiar neighbourhood. Many have also been victims of violence and abuse in situations of civil unrest and war in their home countries, and face possible loss of income and an uncertain future.

In addition, many refugees experience discrimination, victimisation, xenophobia and even violence from South African citizens, including the police, border and immigration officials. They are often blamed for social problems, such as unemployment, poverty, crime and high levels of generalised violence.

Recognising that refugee and migrant populations are particularly vulnerable to violence and HIV, and that they often have reduced access to information and services, Sonke instituted a Refugee Health and Rights Project (RHR) in 2008. To support refugees to access their rights and to challenge the xenophobia that undermines access to health, dignity and rights, Sonke uses interrelated strategies to bring about sustainable change. These strategies will be explored in this case study. 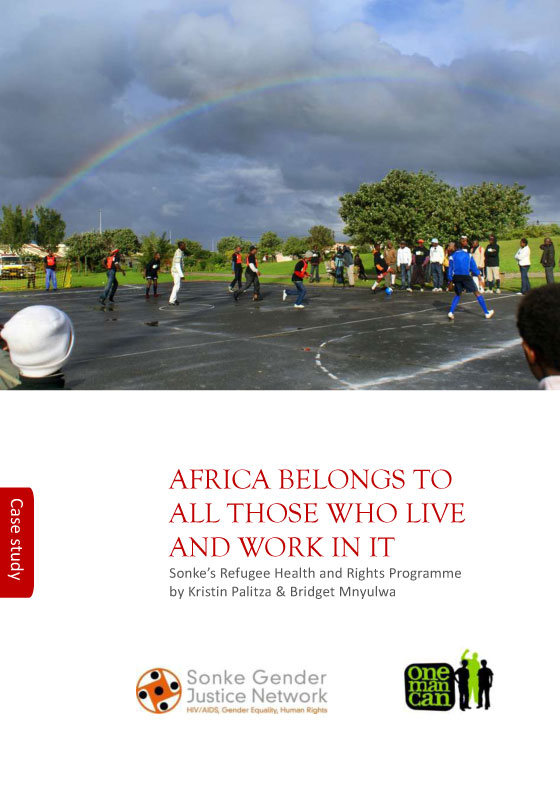